This is now on its fourth iteration and it is a device that a lot of companies have learned from because at this point in time there are so many thin bezel ultrabooks on the market. But I still think that the 2019 XPS 13 is one of the best options that you can get for just overall 13-inch ultrabooks. There’s Dolby vision ECR support and somehow Dell managed to shave off even more screen bezel. It’s the rare gadget that we can recommend to just about anyone. Let’s start with the most noticeable upgrades with Dolby vision and HDR the XPS 13 screen will be able to handle brighter highlights and darker black levels than before. Unsupported content like Netflix’s Daredevil and love death and robots everything just pops off the display a bit more. You’ll also find plenty of HDR video on youtube but Netflix is your best source for things you’d actually want to watch. It’s notable that the XPS 13 offers Dolby vision. Since it’s the gold standard of HDR at the moment. It’s a premium feature on modern TVs so it’s even rare to see it in laptops.

Unfortunately, BFD services like iTunes Vudu and Amazon Prime video don’t offer 4k HDR in Windows yet. We are hoping that changes as more PC start to support those standards but even with plain old HD content the XPS 13 S display still looks tremendous with vibrant colors and contrast are reviewing it came with the 4k panel but you likely won’t notice a huge difference with a 1080p option on a 13.3-inch screen.

Outside of OLED panels which are coming through the XPS 15 and other 15-inch laptops later this year the XPS 13 screen is one of the best on the market today. Above that glorious display sits a webcam. For the past few years, Dell had to shove the camera below the display. Giving it one of the ugliest video chatting angles we’ve ever seen. That was a trade-off for improving bezels infinity edge display which describes the slim bezels around the screen for this year’s model.

The company has developed its smallest 720p webcam ever We are measuring a two and a quarter millimeters wide. It’s not the sharpest we’ve seen on a laptop but at least it’s functional. The XPS 13 also features a quad microphone array which is useful for clearer audio during video calls as all shouting Cortana commands. Still is one of the first companies to introduce near bezel s screens it’s nice to see Dell continually improving its infinity edge test. Even Apple is following suit with its laptops. It’s still being at a class by Dell just compare the latest MacBook Air screen bezel to the XPS 13. The difference is huge. Dell didn’t change much with the XPS 13 s overall design. It’s still built out of smooth aluminum with a subtle aesthetic at 2.7 pounds. It’s not the lightest ultraportable around. An inlaid Dell logo is the only bit of flash behind the screen. While the underside has two rubbery grips air vents and XPS branding.

The company took another swing at the white woven glass fiber palm rest they introduced last year. It’s brighter and smoother than before. It also looks great alongside the new arctic white case which feels classier than the rose gold option and don’t worry the traditional silver XPS 13 is still around along with its black carbon fiber wrist dress. The XPS 13 screams refinement from just about every angle.

The XPS 13 performs well but that doesn’t matter much if the battery life can’t keep pace. Based on our test which involves looping an HD video until the juice runs out. It lasted around 12 and a half hours two and a half hours longer than last year. Basically, you can count it lasting you through a typical workday. Dell didn’t make any major changes to the XPS 13 keyboard and trackpad which is a great thing. They’ve always been among the best we’ve seen on Windows PCs and that remains the case this year. Typing on the keyboard feels responsive and snappy and the trackpad is wonderfully smooth and when it comes to connectivity you’ve got three USB C ports two of which support Thunderbolt 3 as well as a micro SD card reader and a headphone jack. Thismodel with a Core i5 and double theamount of RAM and storage for $1200 andof course you can also pick and chooseindividual components to your likingadding a touchscreen to the base 1080pmonitor is an additional $100 while the4k touch display is an extra $300. For alaptop of this size you’re better offsticking with a 1080p screen andpersonally I likehaving the touchscreen for browsingthrough long articles.

Its alll your wish, if you like the laptop, then you buy and this is one of the fastest confrigation in todays market. 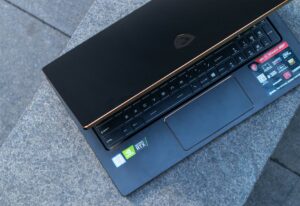