The galaxy A51 design is no surprise if you’re familiar with Samsung’s phones. Just like last year’s model, it looks similar to a Samsung flagship but it’s made of plastic to cut costs. It even brings back the same finish as last year which gives off a rainbow of colors in certain lighting. There’s a new texture underneath this time around to set it apart. Other than that, the only major difference is the new L-shaped camera setup which houses 4 cameras and the LED flash. The Phone is slim and light.

The rear of the galaxy A71 is designed with what Samsung dubs as prism effect. There are diamond shapes on the rear, cleared with a subtle linear pattern. It pleasant to look at with the rainbow hues streaks that shows up when it catches light. Despite the attractive rear, the finish is glossy plastic and Samsung calls it “GLASSTICK” which endlessly attracts fingerprints.

The A71 has a Super AMOLED plus infinity O display that’s pretty sizable at 6.7 inches. Slim bezels are rather display and it employs a hole punch module for its front camera.

The volume rocker and the power button are located on the right side of the device individuals with smaller hands might find it a little hassle to press one-handed.

On the left, you can find the dual SIM card tray where they dedicated SD card slot.

At the bottom is a 3.5 headphone jack, USB type-c port, noise cancelling microphone, and the single downward firing speaker.

Overall, the A71 is thin and lightweight despite its massive size. Also even if it’s light weight, the smartphone is solid. The rounded corners also make it comfortable to hold.

They have a nice L-shaped look to camera’s and the whole look of it is very similar to what you’re gonna see on their super high-end flagship phones, the Galaxy S20 family that is coming later on.

The main 48 Megapixel camera sensor can take some nice crispy shots, what I really like is that Samsung has at once again brought their flagship level software algorithm to this camera, so you really don’t get over-exposed photos. The colors are nice, dynamic range is great, really nice saturation, a lot of times these photos are perfect for sharing on Instagram without doing any tweaking. It’s got an ultra wide-angle lens as well for taking those ultra wide shots which is also very detailed.

It can shoot 4K video recording from both front and back cameras but you don’t get the image stabilization on those modes. So if you want to stabilize footage, you should use the 1080p mode on this one.

It also comes with a macro lens which is kind of a gimmicky to me, I mean you can get really close to the subject but like not too close and the images are not really that sharp, unless you you’re shooting in a good lighting condition. So I’m not that impressed with the macro lens but overall, it is doing a great job with there’s a primary and ultra wide-angle lens.

The Galaxy A71 has a quad camera setup situated inside a rectangular shaped module. It is placed on the upper left corner of the back and the module slightly raised from the rear.

Photos produced by the front camera are quite impressive. They look natural under amp lighting with good colours and decent details. With a beauty mode turn on imperfections get blurred out and the skin looks pretty smooth.

Portrait-wise, Samsung lets its user modify the blurs, subject, and background separation is present but it’s quite messy as the blurring around the edges looks harsh and obvious.

The rear cameras also take decent photos with good colors and ample details. The image produce are satisfied enough to be shared on social media.

Using the ultra wide lens, there’s a slight fisheye effect to the photos. At the colors tend to appear a little darker than the primary camera. Similar to the portraits selfie image, the rear SportShift mode also allows its users to control the blurs trend. The subject background separation on the rear cameras is quite better than the selfie mode as the edges don’t appear too harsh.

Video-wise, the Galaxy A71 can shoot up to 4k of 30 frames per second. The device doesn’t note that if you prefer to shoot in 4k the resolution won’t support video effects and video stabilization.

Shooting videos in 1080p does have video stabilization and it’s pretty good overall. 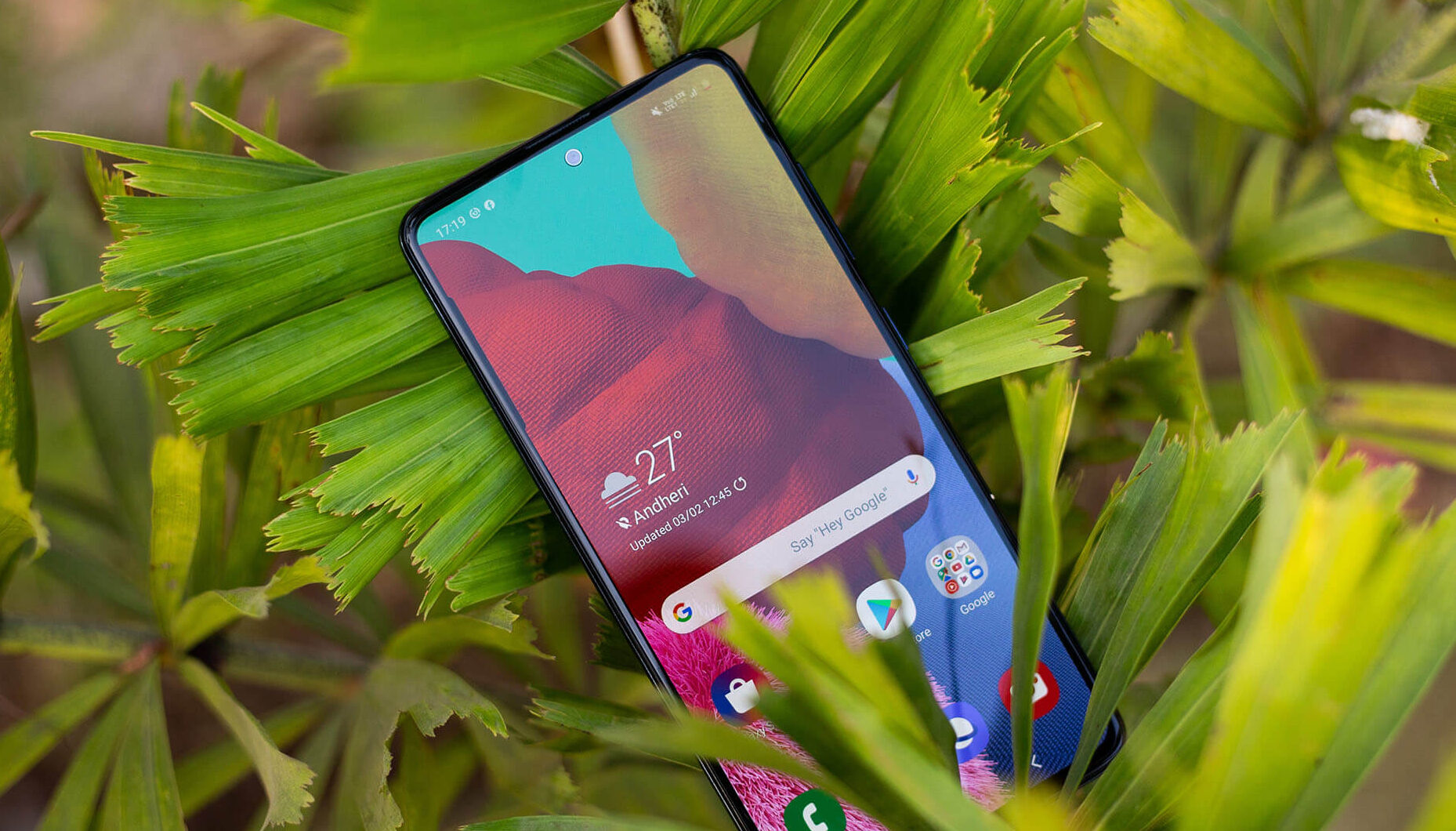 The 6.5 inch 1080p AMOLED display provides an excellent viewing experience with its vibrant colors and deep blacks, in addition to having plenty of brightness to be seen outside and in direct sunlight.

We have our punch-hole front-facing camera here which might look like a disturbance but honestly it is significantly smaller than the Galaxy Note 10 Plus.

The A71 supports a massive 6.7 inches AMOLED panel with the resolution of 2400 by 1080. Pt’s absolutely immersive, given the thin bezels around the panel, and the hole punch front camera that isn’t quite as obstructive as notches.

The colors are vibrant and punchy and blacks come out deep as well. Panel brightness is also brave, we had it set around 40% and we had no trouble using it under direct sunlight.

Now as for the phone speakers, the speakers did sound great, but I did find that the volume was not as loud, but overall, it had great clarity in music and vocals.

The audio is average. It can get loud and feel a room but it can get distorted at times while the volume is set to maximum. Mids and highs are present but the lows are pretty much absent. The performance of the galaxy A51 is decent at best. It’s the Exynos 9611 but even then the phone doesn’t seem or does you feel as spontaneous. This is the only area I felt the galaxy A51 lags and if you’re looking for a phone that’s super snappy, the A51 may disappoint at times. So while things felt a little slow in terms of opening apps and switching between apps. There weren’t any issues while gaming, Once the game is loaded the gameplay is smooth.

The notch at the top doesn’t really interfere. Even PUBG defaulted the game’s graphics quality to highest. Graphics animations and response to touch are actually quite good.

The Galaxy A71 comes with Qualcomm Snapdragon 730G chipset paired with 8 gigabytes of RAM. Basic tasks such as navigation, web and social media browsing, messaging, and such aren’t a problem with A71. Multitasking wasn’t an issue as well. The A71 was able to handle pretty much any task we threw at it.

Gaming-wise, we test it out Call of Duty and we didn’t experience any noticeable lags or frame drops.

Now as for the phone software, it is shipped with the latest Android 10 with the ONE UI 2 skin. It is one of my favourite Android skins out right now. And then there’s also the super frequent software updates recently, to ensure overall smoothness when navigating and also multi-tasking.

The Galaxy A71 is running on the latest version of Android 10, it is skin with OneUI 2.0. This is a good software setup but you should know that eats up your 22GG of your storage. The OneUI brings a native screen recorder to the phone. It has very nice One-handed tool. Overall, the look of the OneUI is very good.

Now as for the phone’s battery, the phone comes with 4,000 mAh of battery, and during my usage using the phone as my daily driver, I got an average of 4 hours and 56 minutes to 5 hours of screen on time, when I was at 10% battery, which was nice. Now there’s obviously no wireless charging, but there is a 15-watt fast charging on the phone.

The Galaxy A71 one has a pretty sizable 4500 mAh battery and also has a 25 watt fast charging support. Though we couldn’t run it through the usual PC mark battery test as the app keep crashing on us. Instead we subjected it through our video loop test. At 1080p video – 50% brightness, 50% audio, airplane mode turned on with earphones plugged in and the Galaxy A71 scored us a total of 21 hours. Personally, I’m leaning towards the A71 mainly because of those better internal specs. I think considering the price difference isn’t so drastic, the extra investment is worth it. However, I do realize that while the price is only a $100-$250 more, that’s still potentially a 25% premium which might be out of the question for some people.

If you can’t justify the extra costs, the A51 is still gonna be an awesome phone and you should definitely go for it but I think the A71 is more than 25% better than the A51 which is why I personally recommend it.